Whether you’re a master carver, love pumpkins just because, or want to WOW your family and friends, attending Pumpkins After Dark is likely one of the most impressive visual feasts you will experience all year. Or perhaps in your life.

With over 6,000 carved pumpkins on display at Burnaby’s Swangard Stadium/Central Park, even the not-so-easily-impressed will be gobsmacked at the creative artistry and sheer magnitude of this award-winning event.

Best of all is that it is a family-friendly event! Literally, anyone can go. The sizeable displays include superheroes and Disney characters. There are a few displays of classic horror monsters and zombies, but your kiddos definitely won’t see any blood or gore and nothing will jump out at them or be even remotely scary.

The event invites a leisurely stroll through the extensive display, so when you do come, bundle up the kids and leave plenty of time to explore.

This is truly a “take-your-time, let-your-spirit-guide-you” kind of event. Just follow the pathway of lit pumpkin sculptures and displays. Your journey will be accompanied by music, sounds and special effects, all in Halloween-esque theme. You’ll encounter Halloween characters, dinosaurs and dragons, as well as movie and pop culture icons.

Who came up with the idea for the event?

The founder is James Fraser, who originates from Milton, Ontario. He’s the brainchild behind the Pumpkins After Dark event. When James was living in Connecticut, he witnessed some very extravagant Halloween displays. Suffice to say, they know how to do Halloween right south of the border! When James came back to Canada, he decided Canadians needed something of similar magnitude, and started the showcase in 2019. Now the event is featured in four cities across the country: Milton, Burnaby, Calgary and Edmonton.

The planning is a huge orchestration for James. He needs to keep on top of trends, allowing creative artistry from the sculptors and ensuring everything arrives on time and well ahead of schedule. Believe it or not, it requires an entire year to develop the next year’s display. As soon as one year’s event is over, they start planning for the next! And once the event starts to approach, it takes weeks to set up. Can you imagine not only transporting 6,000 pumpkins, but then arranging them and ensuring they aren’t damaged, rotting or otherwise? I mean, we’re talking vegetables here!

Where did the carving pumpkins ritual come from?

According to Wikipedia, “It’s believed that the custom of making jack-o’-lanterns at Halloween time began in Ireland.” In the 19th century, turnips  were hollowed out to act as lanterns and often carved into grotesque faces. In Gaelic-speaking regions, Halloween was also the ‘Festival of Samhain,’ when supernatural beings and the souls of the dead walked the earth.

By those who made them, the lanterns were said to represent either spirits or supernatural beings or were used to ward off evil spirits. Sometimes they were used to frighten people, or set on windowsills to keep harmful spirits out of one’s home.

There are other stories and myths, but suffice to say that we all seem drawn to the representation of faces and figures carved out of a gourd. We are attracted to the mysterious fascination of it all, the eerie unnatural essence and the association with things that are used to surprise, delight and evoke unsettled feelings. 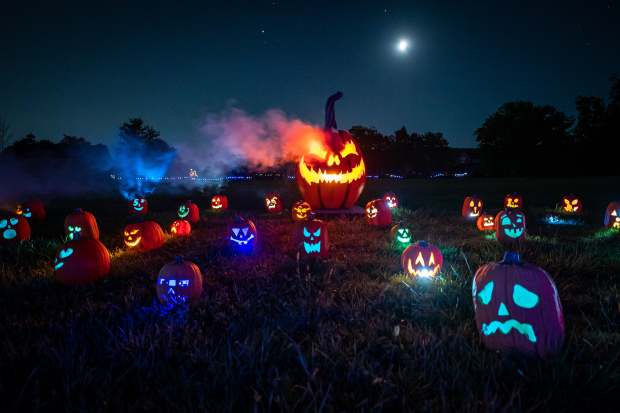 Because the event has become so popular and word is spreading fast, if you are going to go, make sure you don’t leave it too long. Tickets can be purchased online here,  Adults cost $21.95 to attend, youth are $17.95 and children under three are free. A family pack is $74.80.

Parking is limited at Swangard Station, where the event entrance is. The best plan is to take public transport, and if you take SkyTrain, get off at Patterson Station. Consult the TransLink Trip Planner to learn what your best route might be.