With six volleyball courts in action, the Harry Jerome Sports Centre, along the Barnet Highway, marked a lively, noisy and exciting return to sport tournaments May 13 to 15 as it hosted the boys division of the 2022 Volleyball Canada 14U National Championships.

Run in partnership with Volleyball BC, Volleyball Canada invited 40 boy’s teams to the event – 27 from B.C., 10 from Alberta, two from Manitoba and one team from Washington state.

“Burnaby itself is the perfect spot for this event,” said Sandra de Graaff, the Director of Domestic Competitions for Volleyball Canada. “There’s a great deal of opportunity for our participants to get out and explore and that was a big factor when choosing host cities. Tourism Burnaby has been fantastic, connecting us with local partners and setting up discounts for Nationals participants.”

As with all sports, the last two years have been a challenging time with the COVID-19 pandemic cancelling so many competitions. “It’s a great feeling to have volleyball being played across the country again and we are excited to host events once again,” added de Graaff.

This was the first national competition for many young players. Logan Cheung, a 14-year-old athlete with Vancouver’s Apex Volleyball Club started with the sport during the pandemic and was practicing on his own. “It’s pretty exciting to play in a tournament. Volleyball is a really satisfying sport when you get it right.”

Connor Fong,14, of the Seaside Volleyball Club in Surrey said this is his first big competition. “It’s pretty cool. We get to see the other teams from other provinces and compare them to B.C.”

“All the teams, coaches, officials and parents are thrilled to be here,” said Alex Pappas, Manager of Volleyball Operations for Volleyball BC. “It’s been a great feeling to be a part of the Nationals again.”  But, after two years with no large tournaments, organizers had to “dig through old files to find checklists as they were a bit rusty.” But now, Pappas says “they’re getting back into the groove.”

As for seeing more national volleyball tournaments in Burnaby in the future, de Graaff stated, “it’s definitely a city where Volleyball Canada would be proud to host more events.” 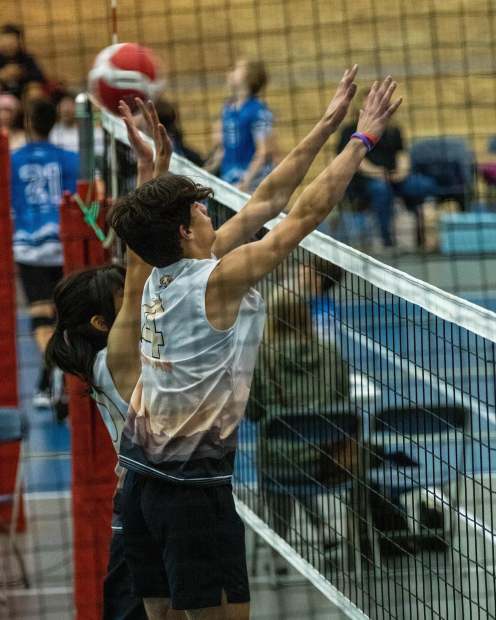